Paving the Way for More Women on Construction Sites

, /PRNewswire/ -- Despite overall advancements in gender equality, many construction sites remain largely male dominated. No stranger to challenging the status quo, national homebuilder and land developer (NYSE: TMHC) believes women can hold any title and do any job—from chief executive officer, to board director, to construction superintendent. 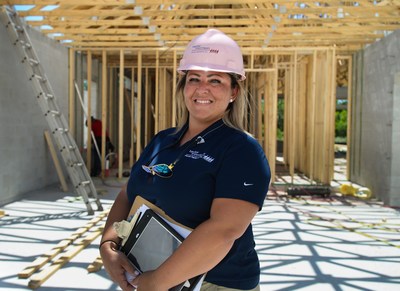 "We believe the intrinsic differences women bring to the construction side of our business make us not only a stronger organization, but also a better homebuilder," said , Senior Vice President of and Operations. "While no two people are the same, women are often naturally communicative, empathic with our buyers, and possess strong attention to detail—all excellent qualities to find in a construction professional."

According to the , nationally, women account for 47 percent of total employment yet make up only 9 percent of the construction industry—a number that has remained largely the same for the last quarter of a century.

Taylor Morrison, however, boasts nearly equal male-to-female workforce representation and women touch every single aspect of the business. In recent years, the company has observed more and more women choosing construction roles. Taylor Morrison currently employs 47 women in construction-specific roles across all markets—a 34 percent increase year over year with hopes of continuing to increase these numbers in years to come.

The uptick may be attributed to the company's recruitment and people development philosophy of ensuring the very best talent—regardless of gender—is chosen for each role. This has led to the company earning a reputation for advancing gender equality, evidenced by their inclusion in Bloomberg's Gender-Equality Index in 2019 and 2020. The increase of women in construction roles may also be attributed to the presence of and Chief Executive Officer serves as a role model for women across the industry—and who remembers her start as a woman in a male-dominated field and sponsors advancing women's equality.

In honor of Women in Construction Week, Taylor Morrison spoke with women who work in various construction roles across the company.

, Assistant Superintendent said Taylor Morrison was her first choice for homebuilders to work for due to Palmer's leadership and the company's dedication to women's empowerment. Percel was recently honored at the 2020 International Builders' Show in as the 'Young Professional of the Year' and is active in several local construction groups and associations including the Professional Women in Building group in .

Percel's advice to young women considering a career in construction is, "Just do it. Find what you're passionate about and go for it. No one is going to stop you."

Corporate Director of Field Operations began her career in homebuilding nearly two decades ago in a hard hat—and since then, she has also worked on the purchasing and sales sides of the business. In her current role, Sutton oversees the systems and applications for Taylor Morrison construction teams nationwide.

"My experience working in the field as a superintendent is what fuels my passion for improving technology and building efficiencies for our construction teams," Sutton said.

, Superintendent first brush with construction was at the age of 15 when she assisted her uncle on different job sites throughout . Pope says she was born mechanically inclined—always intrigued by construction materials, tools and the assembly of things. Two years ago, Pope was hit with a string of personal tragedies when her father, mother and significant other passed away, but she finds strength in building.

"Every day is a new adventure. I get up, I get dressed and I'm glad I can build things. Building homes has always made me happy—I think it's one of the greatest things in the world," Pope said.

From cabinetry to concrete to custom homebuilding, construction runs in , Superintendent family. Initially on a path to a criminal justice career, Fitzsimon switched gears to work in the office of her father's custom cabinetry business—doing data entry and purchasing. It was then that she realized construction was calling her name.

"Being in the field—boots in the trenches—and physically seeing and touching the project I'm working on is just moving to me," Fitzsimon said.

About Taylor Morrison
(NYSE: TMHC) is a leading national homebuilder and developer that has been recognized as the 2016, 2017, 2018, 2019 and 2020 America's Most Trusted® Home Builder by . Based in Scottsdale, Arizona we operate under two well-established brands, Taylor Morrison and . We serve a wide array of consumer groups from coast to coast, including first-time, move-up, luxury, and 55 plus buyers. In Texas, builds communities with a focus on individuality and custom detail while delivering on the Taylor Morrison standard of excellence.